It is a common practice to break large audits up ant to involve multiple auditors. Or a single auditor may want to create multiple separate audits (one for each site or one for each department). These multiple audit files can easily be merged into a single documents with AuditSoft. Below we we discuss the steps for completing a team or department audit.

The first step is for the Lead Auditor to purchase a license and to setup the Master audit file. This is a AuditSoft audit (.asa) file for which the auditor has:

The next step, before starting any of the Evidence Gathering steps, is to distribute the Master file to each of the team auditors. This will ensure that all the auditors have files containing the correct Site names and interview requirements.

When the supporting team auditors open the Master file that was sent to them they:

The team auditors can then start to Gather Evidence at each of the sites that they visit.

When to Merge Audit Files

When you merge audit files AuditSoft will merge the content of all the sections within the file.

In most cases the audit team collects the  Documentation review, employee Interviews and Observation tours (DIO) evidence and a single lead auditors compiles the final report. If this is the case the merging of files should be completed AFTER the Gather Evidence steps have been completed and BEFORE  the lead auditor compiles the Audit Results 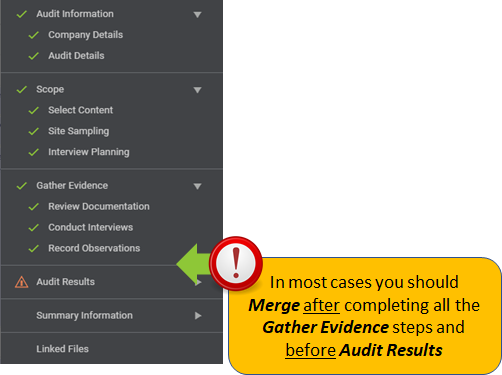 Once all the auditors have completed the evidence gathering steps they should send their audit files back to the lead auditor who will then merge them into a single file. For details on how audit files are merged see Merge rules below.

To start the Merge the lead auditor will:

In order to merge two or more files the following rules apply:

How are files merged:

S
Support is the author of this solution article.

Did you find it helpful? Yes No

Send feedback
Sorry we couldn't be helpful. Help us improve this article with your feedback.